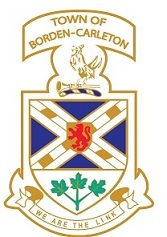 The blue and white satire with the smaller shield bearing the lion is representative of Scotland, from whence the early settlers came. The cable twist of gold and black symbolizes the first submarine cable in America, laid from Cape Tormentine, New Brunswick to Carleton Point in 1851. The opposite diagonal band represents the arrival of the railway to Borden in 1916. The base of the shield is the contribution made by the Honourable R. L. Borden, Prime Minister (1911 - 1920) to the armorial of Canada. On seeing the red maple leaves on the original artists rendition, he promptly changed them to green to signify a young country. In 1957, the leaves were officially changed back to the original red. Above the shield is the personal crest of Sir Robert Borden, a Moorcock perched on an hautboy. The motto "We are the Link" alludes to both the Northumberland Strait car ferry link between Borden and Cape Tormentine, New Brunswick, and to the submarine cable.